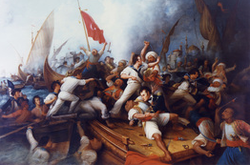 The First Barbary War (1801–1805), also known as the Tripolitan War or the Barbary Coast War, was the first of two wars fought between the United States and the Northwest African Berber Muslim states known collectively as the Barbary States. These were the Ottoman provinces of Tripoli, Algiers, and Tunis, which were enjoying a large autonomy, as well as the independent Sultanate of Morocco. The war was fought because U.S. President Thomas Jefferson refused to pay the high tributes demanded by the Barbary states and because they were seizing American merchant ships and enslaving the crews for high ransoms. It was the first military conflict authorized by Congress that the United States fought on foreign land and seas. 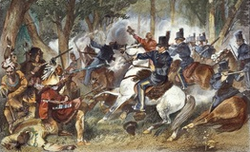 Tecumseh's War or Tecumseh's Rebellion was a conflict in the Northwest Territory between the United States and an American Indian confederacy led by the Shawnee leader Tecumseh. Although the war is often considered to have climaxed with William Henry Harrison's victory at the Battle of Tippecanoe in 1811, Tecumseh's War essentially continued into the War of 1812 and is frequently considered a part of that larger struggle. The war lasted for two more years before Tecumseh was killed by Americans at the Battle of the Thames in Canada in 1813 and his confederacy disintegrated. The tribes remaining in the newly expanded U.S. signed treaties and were forced to sell their lands and moved west by the 1830s (in the wake of the Indian Removal Act). In long-term context, historians place Tecumseh's War as the final conflict of the Sixty Years' War resulting in the European conquest of the Great Lakes region. (Where he traveled by canoe and horseback to Florida carrying his message of pan Indian land tenure.)

The War of 1812 was a military conflict, lasting for two-and-a-half years, between the United States of America and the United Kingdom of Great Britain and Ireland, its North American colonies and its American Indian allies. Seen by the United States and Canada as a war in its own right, it is frequently seen in Europe as a theatre of the Napoleonic Wars, as it was caused by issues related to that war (especially the Continental System). The war resolved many issues which remained from the American Revolutionary War but involved no boundary changes. The United States declared war on June 18, 1812 for several reasons, including trade restrictions brought about by the British war with France, the impressment of American merchant sailors into the Royal Navy, British support of Indian tribes against American expansion, outrage over insults to national honor after humiliations on the high seas and possible American interest in annexing British North American territory (part of modern-day Canada).

The Second Barbary War (1815), also known as the Algerine or Algerian War, was the second of two wars fought between the United States and the Ottoman Empire's North African regencies of Tripoli, Tunis, and Algeria, known collectively as the Barbary states. The war between the Barbary states and the U.S. ended in 1815; the international dispute would effectively be ended the following year by Great Britain and the Netherlands. The war brought an end to the American practice of paying tribute to the pirate states and helped mark the beginning of the end of piracy in that region, which had been rampant in the days of Ottoman domination (16th–18th centuries). Within decades, European powers built ever more sophisticated and expensive ships which the Barbary pirates could not match in numbers or technology. 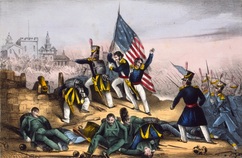 The Mexican–American War, also known as the Mexican War, the U.S.–Mexican War or the Invasion of Mexico, was an armed conflict between the United States and the Centralist Republic of Mexico (which became the Second Federal Republic of Mexico during the war) from 1846 to 1848. It followed in the wake of the 1845 U.S. annexation of Texas, which Mexico considered part of its territory, despite the 1836 Texas Revolution.

Combat operations lasted a year and a half, from the spring of 1846 to the fall of 1847. American forces quickly occupied New Mexico and California, then invaded parts of Northeastern Mexico and Northwest Mexico; meanwhile, the Pacific Squadron conducted a blockade, and took control of several garrisons on the Pacific coast further south in Baja California. Another American army captured Mexico City, and the war ended in a victory for the United States. 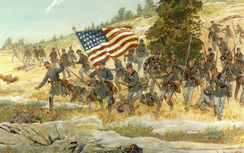 The American Civil War, widely known in the United States as simply the Civil War as well as other sectional names, was a civil war fought from 1861 to 1865 to determine the survival of the Union or independence for the Confederacy. Among the 34 states as of January 1861, seven Southern slave states individually declared their secession from the United States and formed the Confederate States of America, known as the "Confederacy" or the "South". They grew to include eleven states, and although they claimed thirteen states and additional western territories, the Confederacy was never recognized by a foreign country. The states that did not declare secession were known as the "Union" or the "North". The war had its origin in the fractious issue of slavery, especially the extension of slavery into the western territories. After four years of bloody combat that left over 600,000 Union and Confederate soldiers dead, and destroyed much of the South's infrastructure, the Confederacy collapsed, slavery was abolished, and the difficult Reconstruction process of restoring national unity and guaranteeing civil rights to the freed slaves began.

Red Cloud's War (also referred to as the Bozeman War or the Powder River War) was an armed conflict between the Lakota, Northern Cheyenne, and Northern Arapaho on one side and the United States in Wyoming and Montana territories from 1866 to 1868. The war was fought over control of the Powder River Country in north-central Wyoming. In 1863, European Americans had blazed the Bozeman Trail through the heart of the traditional territory of the Cheyenne, Arapaho, and Lakota. It was the shortest and easiest route from Fort Laramie and the Oregon Trail to the Montana gold fields. From 1864 to 1866, the trail was traversed by about 3,500 miners, emigrant settlers and others. The emigrants competed with the Indians for the diminishing resources near the trail. 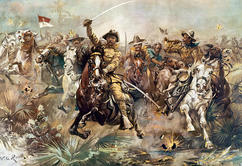 The Spanish–American War was a conflict in 1898 between Spain and the United States, the result of American intervention in the Cuban War of Independence. American attacks on Spain's Pacific possessions led to involvement in the Philippine Revolution and ultimately to the Philippine–American War.

Revolts against Spanish rule had occurred for some years in Cuba. There had been war scares before, as in the Virginius Affair in 1873. In the late 1890s, American public opinion was agitated by anti-Spanish propaganda led by journalists such as Joseph Pulitzer and William Hearst which used yellow journalism to criticize Spanish administration of Cuba. After the mysterious sinking of the American battleship Maine in Havana harbor, political pressures from the Democratic Party and certain industrialists pushed the administration of Republican President William McKinley into a war he had wished to avoid. Compromise was sought by Spain, but rejected by the United States which sent an ultimatum to Spain demanding it surrender control of Cuba. First Madrid, then Washington, formally declared war. 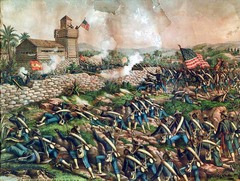 The Philippine–American War (Filipino/Tagalog: Digmaang Pilipino-Amerikano) (1899–1902) was an armed conflict between the United States and Filipino revolutionaries. 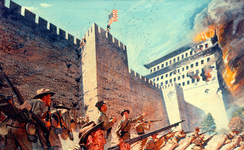 The Boxer Rebellion, Boxer Uprising or Yihetuan Movement was an anti-imperialist uprising which took place in China towards the end of the Qing dynasty between 1898 and 1900. It was initiated by the Militia United in Righteousness (Yihetuan), known in English as the "Boxers," and was motivated by proto-nationalist sentiments and opposition to foreign imperialism and associated Christian missionary activity. The Great Powers intervened and defeated Chinese forces.
Powered by